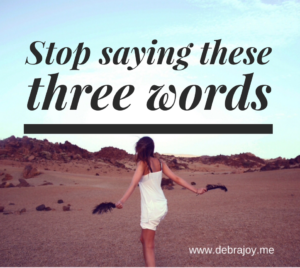 When she has to make an important decision, or feels stressed about something, my niece sometimes phones me for advice. It’s a call I love to get. I’m delighted to tap into her world for a while and offer help however I can. I love that she trusts me and wants me to be involved.

At some point in the call she usually asks me to tell her what to do, but that’s not really my way. While I’m happy to share my experience, or offer options she hasn’t considered, I’m most interested in helping her access her own wisdom. I want her to touch the place deep inside her where her own answers lie. I have no interest in telling her what to do.

Until the last call.

My niece is fortunate to be good at many things. She’s smart, athletic, musical, creative and kind. She has a confidence I never knew at her age. (Can you tell I’m an aunt?) She called me at the beginning of this school year because she wasn’t sure what to do about sports. Her workload at school is heavier, and her time with friends is important. She’s been dancing ballet since she was young. She loves ballet and how it makes her feel, but the program was changing and she wasn’t sure she wanted to continue where she’d been since it’s a major time commitment.

She was considering soccer as an alternative, but was concerned. She wished her mom had made her play soccer when she was young, even though she hadn’t wanted to. The girls she knew who played soccer had been doing it for many years. They knew the game, they’d developed their skills, and they’d bonded. She told me she was worried that “It’s too late.” She didn’t feel that at the ripe age of 15 she could catch up.

It was those three words that changed my way with her. It told her straight out, “Join soccer!”. I said, “If for no other reason, join soccer so that you don’t start telling yourself It’s Too Late. That belief will limit you the rest of your life.”

She joined soccer. It turns out she’s a natural. She’s fast and athletic and will probably be a soccer superstar. She loves it! She’s having fun, meeting new friends, getting to be part of a team and staying really physical. And she’s learned that “It’s NOT too late”. That’s a lesson I hope she’ll carry with her forever.

Whether you want to learn an instrument, fall in love, get healthy, ask for forgiveness, start a new career, run a marathon, or travel to some far off country, it’s not too late. It may not happen the way you expect, but you’re willingness will open that door, and that makes anything possible.

What would you do if you stopped telling yourself It’s Too Late?