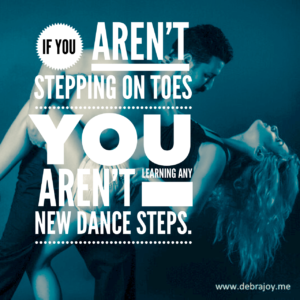 When I worked in venture capital, entrepreneurs would pitch me on their business. I’d determine if their product or service met our criteria, if there was a viable market for it, and most importantly, if i believed in the leader. Was this a person (or team) that could do the job, did we want them in our portfolio, could we work beside them and support them to achieve their goals?

One day I met with two entrepreneurs who presented a great pitch. I liked the guys but something bothered me, so I went directly to my boss. Joel Solomon, the co-founder of our fund, has taught me so much over the years. But this lesson struck me like the slap across the face I needed to wake up.

I told Joel I was concerned that both these men had business failures in their past. He responded, “Just because a man has failed, it doesn’t make him a failure”.

That simple statement shocked me. Though I felt the truth of it in my bones, I’d lived quite differently. I had seen all my own failures as reflections of my tragic flaws. Each one a small death. They were signs of weakness in the survival of the fittest. They were a part of me I wanted to hide.

Constantly facing the bright light of goals and achievements, I had tucked my failures behind me, where they’d stayed in the shadow of shame, weighing me down and holding me back. Though I’d often been a risk-taker, the fear of failure had stopped me at times, made me anxious, and killed my joy. My inability to really embrace each failure and integrate it into my experience, squelched my opportunity to really learn from them, laugh about them, and lighten up.

Joel’s statement turned failure upside down for me. If they weren’t failures because they’d failed, then neither was I.

Failure doesn’t define you. It informs you.

Then Joel added, “My mentor taught me to never trust anyone who hasn’t been through a bankruptcy.”

That was a hard one for me to swallow at the time. Seriously, dude, my mind is imploding from your first slap, and now you add that! Bankruptcy is the ultimate failure. But Joel saw it differently. It meant truth telling, learning, slate clearing, and humbling.

Not everyone who’s failed has learned from it, but people who take responsibility for their life and strive to do great things, see each failure as an opportunity to re-examine their beliefs and behaviours, and experiment some more.

So I encourage you to Embrace Failure to Accelerate your Success.

When you embrace failure it becomes just one experience among many. It’s simply what happens when the result of your actions doesn’t match your expectations. It loses it’s power over you, and you become truly powerful.

You don’t have to take my word for it. Michael Jordan, one of the greatest basketball players of all time, said “I’ve missed more than 9000 shots in my career. I’ve lost almost 300 games. 26 times, I’ve been trusted to take the game winning shot and missed. I’ve failed over and over and over again in my life. And that is why I succeed.“

Stop fearing failure. Don’t shun it, hope to avoid it, or even reluctantly accept it. Get to know it. Open your door and welcome it in like a long lost friend.  Wrap your arms around it and give it a hug.

When fear of failure loses it’s power over you, you become truly powerful.

I’d love to hear how failure has informed you:

If you know someone who is definitely not a failure, and may need some encouragement to try again, please share this post with them.