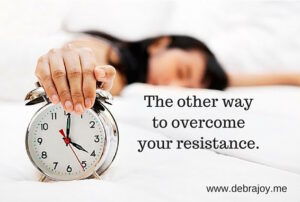 There are two ways we usually deal with resistance:

There are times when pushing through resistance is exactly the right thing to do. Until this summer when the ocean where I live became very warm, every time I’d go in I’d think “It’s too cold”. I’d want to rush back to shore and watch from the beach. But then I’d miss the fun of diving into waves and being pummeled by the surf.

So instead I’d focus on the fun and let it pull me through my resistance, running into the ocean as fast as I could. My body always adjusts to the temperature, and I have a great time.

Then there are times when it makes sense to just succumb to resistance. For some time I’d been wanting to write some of the practices I’ve developed over the years for myself and my clients, and offer them as a sort of manual. I tried to force myself to sit down and write at the same time each day as real writers advised. But I couldn’t find the juice. My internal voices said succumbing to my resistance was based in fear or laziness. I tried to push through my resistance and keep my bum in the chair as I was advised to do, but there was no pleasure it in. (how ironic would it be to write about pleasure while feeling none?)

So I succumbed to my resistance, and did other things. Pleasurable things. It took some experimenting for me to effectively describe these practices in words on a page. Now the words seem to be flowing out of me with greater ease, in my own rhythm and pace. (You can subscribe below to get yourself a free chapter)

These two approaches will work in different circumstances, but if you only operate with these two you’ll miss much of the wisdom your resistance wants to teach you.

There’s a third and less known way of dealing with resistance, and it’s this:

A client of mine has developed a successful program that other people purchase and teach to their clients.  Over the past year she’s been refining it based on the teachers’ feedback. As she was implementing the feedback she noticed that there was one change she kept avoiding. She would distract herself with other things, and kept missing her own deadlines for making the change. She knew she had to do it but she was procrastinating, and feeling bad about herself for procrastinating.  So I recommended we examine her resistance to getting it done.

What we discovered underneath the resistance was her wisdom that this change would alter the integrity of the program, which was built on honesty, intimacy, and face to face support.  She wasn’t consciously aware that this was at the core of her procrastination, but this wisdom was lurking under her resistance all along. Once she said it out loud she knew it was true. Once she understood why she wasn’t making this change, even though some teachers had requested it, her confidence in herself, the program, and its power soared. Examining her resistance made her revisit the core values of the program.

She wrote to me: I’ve never really thought of it in this way before but I honestly LOVE exploring resistance! I love my instincts.  My resistance to something is kind of like my instincts saying, “DON’T Do this.” Since it’s a stopping/slowing/reversing motion it doesn’t feel as good as “Do this.”

I really didn’t know why I had this resistance. It didn’t become clear until you and I talked about it the other day.  It makes sense to me now why I don’t like the idea – because, it breaks the human connection, and the key to [this program] is the human connection.  But it became crystal clear when we talked it through.
The beauty-part of this is that now, with a clear understanding of my resistance, I can take proper action. Instead of just [making the changes] because people have asked for them, yet not feeling good about it, I can really explore if there is a way to keep the human connection while utilizing these modalities.  I’m totally open to seeing if I can.  I would actually love it if it could work.  That would be win-wins all around. And, if it truly doesn’t work, I can then say clearly and with integrity that that will not be part of the program, explain clearly why, and then let the instructors figure out how to deal with that on their own.
~ Coaching Client

(printed with client’s permission)
Can’t you just hear the enthusiasm and confidence in her voice? I promise you it was a big change from how she’d been feeling before examining her resistance.
1. She could have pushed through her resistance and done what she thought she should have done to make the teachers happy. She could have continued feeling bad about it, not really knowing why.
2. She could have continued succumbing to her resistance, worrying about what she thought she should be doing, procrastinating and zapping her confidence and creative energy.
3. By honoring it she discovered the underlying wisdom, made clearer decisions, felt empowered and created a kick-a** program, the teachers love.
Honoring your resistance will reveal the underlying wisdom in it.

How do you honor your own resistance?
There are many ways: You can speak with it, write to it, draw or dance with with it.  Whatever modality suits you best, here are a few things to keep in mind:

And if you really want to understand your resistance, become it.

By becoming the resistance you are no longer separate from it, in reaction to it, nor the victim of it. This can be a very empowering exercise.

If you know someone stuck in their own resistance, please share this with them as a potential way through.