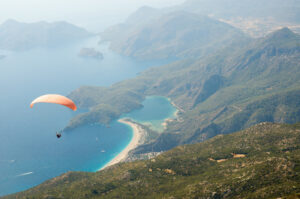 A friend of mine is going through a big change in her life. Not the kind that’s thrust upon you when you least expect it and have to deal with it. This is a change she’s been talking about for some years. She’s choosing it. Deciding to change is definitely easier than having change thrust upon you, but that doesn’t mean it’s easy.

I can see that this change is a calling from deep within. It’s a nudge to spread her wings and fly. She has decided to leave something that had been secure and safe for almost three decades. It was good in many ways. Comfortable. But staying won’t satisfy her heart, which is longing for freedom, expansion and joy.

She set this transition in motion several months ago. Since then there have been decisions to make, difficult conversations to have, logistics to figure out and lots of work to do. And she’s been doing it all courageously. She’s experienced fear, relief, laughter, tears, doubt, grief and happiness, sometimes all in an afternoon.

As she neared the final stage of this transition she said to me, “I’m thinking of delaying for three months”. My immediate response was “DON’T STOP. KEEP GOING. I know you’re afraid, but delaying it will only prolong the pain. You’re almost at the edge…. JUMP.”  That was scary advice because she felt that much of what she was stepping into was unknown.

It’s scary to jump into the unknown. But that is how you fly.

When I lived in a little village in Mexico I would lie in bed watching paragliders soaring over our little coastal town. Catching thermals they’d rise and fall with the hawks and vultures. They’d glide over the homes, jungle and ocean to land on the beach.

One day I decided to do it too. I chose a “flyer” who had a very safe reputation. I followed him up the mountain through a narrow path. When we got to the top I was exhausted. He unpacked the sail and secured himself to it. He then harnessed me in front of him, and gave me these instructions:

I did what he said. I ran. And when there was no more ground beneath my feet I kept on running like a cartoon character hanging in mid air. Suddenly the wind caught us and we were lifted up. We soared. I loved my village, but I had a whole new appreciation seeing it this way. As we glided over homes and hills and trees I got to know it more intimately in a way I never could by keeping my feet on the ground. I saw things I had never seen. I was elated.

Jumping off that cliff required a crazy kind of trust. In my self – I’d done my research and chosen the best person available on the best possible day, In him – his skill, his reputation and his personality gave me comfort, and mostly in life itself. Life will give me what it will, and most of it is out of my control.

If you want to fly JUMP.

5 thoughts on “If you want to fly you have to jump.”

Feel better in two minutes - or less!Want to achieve your big goals in a way that is actually nourishing?

In this FREE two minute meditation, you’ll reconnect to your best self and get ready to take action towards your biggest, boldest goals.