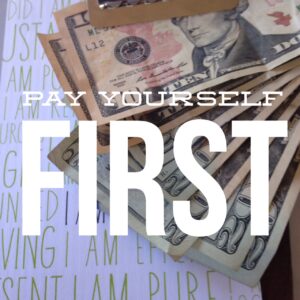 This is the blog I almost didn’t write. Though the idea came to me the moment I posted my Radical Self Care New Year’s Wish, I dismissed it as too obvious and not worth writing. Everybody knows this, I thought. I told that to a friend who responded, “Write It. We don’t know. If we knew we’d be doing it.”

The “It” is simple…. Pay Yourself First.

It should have been obvious to me that this is a post that needs to be written, perhaps not for you, but for that one person who needs to know it, because it’s been my experience with clients that this is not common knowledge.

Most of the clients I work with make more money than I do. Some make A LOT more. But even some clients who make a few hundred thousand a year have complained about money fears and stress. It use to surprise me. It not longer does. They have nice homes, new cars, go on great vacations and have beautiful wardrobes. Upon further investigation I discovered that these money-anxious clients had no savings, were behind in taxes and had credit card debt. The patterns were the same whether their income was $50,000 or $250,000 a year.  No wonder they were stressed.

How does this happen?

These people aren’t dumb . They are smart and creative and doing great things in the world. It’s just that nobody taught them good habits with money.

Having more money won’t change your habits, it will just magnify the ones you have.

So here’s one of the things I teach clients about money. Pay Yourself First. Decide on a percentage of your income and put it aside to invest BEFORE you do anything else. I recommend a minimum of 10%. It’s a nice easy number to remember and it won’t make a big dent in your lifestyle.

With some of my clients there is much grumbling, followed by explanations that it will be too hard, or that small a percentage won’t be enough to make a difference.  But those who do it, and commit to it, turn their financial situation around in lightening speed. It continues to amaze me how fast it changes things. I believe the primary reasons this is so effective are:

It’s important to know that this 10% is for investment only ~ something that will give you a return on your money. It’s about having your money work for you. That’s a critical part of this. An investment is not a $2,000 pair of Manolo Blanik boots or a week at a spa, no matter how much you think those will improve your life.

If it is not giving you a financial return it is not an investment.

You may think you don’t earn enough to pay yourself first, but if you don’t change your habits now, you’re going to keep spending and living in such a way that you won’t be able to afford it later. I was teaching these same principles to my retail staff in the 90’s who were earning between $7.00 and $12.00 an hour. If they can do it you can do it.

If you want to be smart with large sums of money, start being smart with small sums.

Another great excuse is that you’re an entrepreneur and don’t have a regular income. Spending lots of money when big checks come in and feeling broke when they don’t is like being caught in a dieting spiral of binging and starving and binging again. Neither are loving ways to treat yourself. Setting 10% of every cheque aside creates a solid foundation that grows over time and will give you peace of mind. When you’ve got peace of mind you can truly give your gifts to the world, feeling generous and fulfilled.

You may think you’ve got too many other things to worry about. You can’t focus on this now. Well, I learned this principle from my mom, along with “never spend more on your credit card than you can pay off completely when the bill comes”, and “have a year of expenses in savings for emergencies”.

You see when my mom was 33 years old my dad left her will all his debts and two kids. She could have crumbled under the pressure. Instead she got a second, third and fourth job, then used the extra money to pay off his debts and make investments. She bought her first house when she was 35 years old, and went on to build a real estate portfolio that enabled her to retire at 54 years old. She’s got a great attitude and super-human energy, but it shows you what is possible even in dire situations.

I’ve never been a financial wizard, and I don’t have to be. I make money decisions based on what feels good in my body. I don’t have a big house, expensive clothes, or a fat portfolio. But I do have peace. And a life I cherish ~ living by the beach, walking in the sunshine, spending time doing things I love with people I adore. I don’t work very much, and when I do it is profoundly fulfilling.

At 37 years old I was very sick and was told that I might never work again. I was shocked and scared. I had never expected to quit working so young. I was so very grateful that I had some investments to live on, even if I wasn’t ready to start living on them. I thought I’d have many more years to contribute to them, but you never know what life is going to bring your way. I’m healthy enough to be working again and you bet I’m paying myself first.

Make this a year of Radical Self Care and Pay Yourself First.

P.S. My mom only worked multiple jobs for about 4 years to dump the debt and buy her first house. She is now married to a wonderful man who also enjoys travelling the world and doting on the grandchildren.

4 thoughts on “Radical Self Care ~ Pay Yourself First”