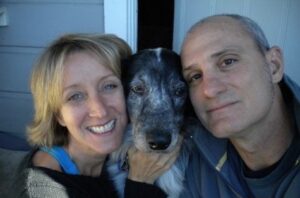 Wednesday was like any other day, until it wasn’t. After my client call I got up to get a glass of water. He always followed me to the kitchen, but today he couldn’t get up. His back legs just wouldn’t work. I watched as he spun and fell on his face. I went to him and gently raised his back end. His front legs crumbled beneath him. I helped him outside where he vomited fiercely, releasing everything from within. I called Mark who came home right away. Making the decision was easy. We have always agreed that we would never let him suffer. I called our vet who was fully booked, but agreed to stay late for us at the end of the day. So we spent a few hours lazing in the shade with him, creating a love sandwich with our bodies.

Guapo and I have covered many miles together over the years. When I was healthy we’d wander between 4 and 8 miles a day. We walked a slow two only yesterday. His pace was the rhythm my body had longed for, and through our walks he taught me to live in sync with my own true nature. I learned to open my heart after hurt, to give without doing, receive without guilt and love myself just the way I am. He taught me that there is no waiting – only being.

He’d started preparing us for this day exactly a year ago, when he took his last long hike. Guapo and Mark climbed to the top of Solstice Canyon the way they liked to do, and sat looking out at the ocean, the breeze blowing through his fur and lifting his ears. The next day he was stiff and moved like the 14 year old dog that he was. From then on we stayed on flat surfaces. Though most days he could still do his regular 4 miles, sometimes he let me know he wanted to turn back early. In recent months our walks had slowed to a crawl, a beautiful bridal procession of 6 legs and two hearts. It was a tender joy to pay close attention to his movements, giving him time to sniff and pee without tugging on his aging body. Even then he was teaching me not to mourn what had been, but to love what is. I was humbled and honoured to be by his side.

Anticipating and serving his increased need for care fit seamlessly into the fabric of my life. It was a privilege to massage his muscles and joints, rubbing in essential oils every night. Each week we would drive him up the coast, through the winding roads of Topanga and into the valley where he’d drop into a warm salt water pool and be transformed into the determined working dog of his youth. It filled us with joy to see him this way. It would add spring to his step for days.

When it was just the two of us, I’d ask Guapo to let me know when he was done with it all, and promised I would do right by him. It was clear today he was ready to go. He rested his head on my lap in the car, a ride I wished would be over soon, and never end. Our final act of loving devotion was a lethal injection that killed him in seconds. It shocked me when his head dropped violently and he lay breathless in my arms. We kissed his beautiful face and stroked his silky fur, the two of us a sobbing mess of devastation, cracked open by love like a Rumi poem. It was so hard to let go, knowing I’d never see him or hold him again. That’s one of the hardest lessons to learn in relationship – the beauty of letting go.

Mark and I walked into the ocean that evening, which was still as warm as summer. We thought it would wash away our tears, but they keep coming. As the warm water splashed around us and the sun set behind the mountains, we talked about how blessed we were to have known him, and learned from him. We figure he must have signed a 10 year contract, not a day longer, and it expired today. Ten years trying to teach the two of us is a long time. I hope we’ve been good students.

When we return to the house it feels too small to me, too big to Mark. We are grumpy Goldilocks without our bear to make everything right. As hard as today was, I know tomorrow will be harder. When I stretch my legs over the bed I won’t feel his strong body below me and run my feet through his silky fur, the black patches mysteriously softer than the rest. I will walk to the kitchen without my 60 lb shadow. When I open the fridge door in the middle of the day, I won’t gently slide his sleeping body out of the way, and quietly move him back in place without waking him. I will eat a banana without his big brown eyes daring me not to share it. When I open the front door I will look at his pillow on the porch where he will not be waiting. And somehow I will find the strength to walk, placing one foot in front of the other.

Your Life is a Love Story. What Chapter Are You Writing Today?

I wrote this on the night of Guapo’s death, two years ago today. It’s part of my love story.

4 thoughts on “A Love Story”