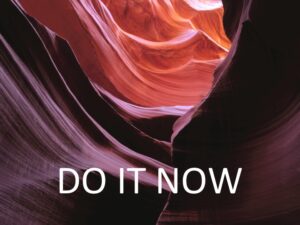 Several years ago my husband and I were talking about our dreams. One thing he’d wanted to do for years was create a film school for at-risk kids in South Central LA. He wanted to help them find their voice and tell their stories in a safe and supportive environment ~  a creative and expressive alternative to gangs.

But he was waiting. Waiting until he’d made it. He had his own criteria for made it; projects being developed, a certain income being achieved, a degree of white space in his calendar. He believed that then he’d have the time and resources to pour his heart into this project.

So I asked what any encouraging, supportive wife would ask: “What if you never make it?”

There were all sorts of reasons to wait, but an even bigger reason to just do it ~ His heart was in it. He was motivated by love.

So he did it. In 2007 he launched the Urban Oasis Film Academy. HBO stepped up with funding. He found the energy. For months at a time he would spend 12 – 15 hours every Saturday and Sunday teaching these kids, feeding them and then driving them home in small groups in our little convertible.

Since then about 100 young people have been through the program. It’s made a big difference in the lives of some of these kids, given them direction, and made them feel cared for. Some have even gone on to college or work in the film industry. I don’t know the impact it’s had on everyone involved, but I know what it’s done for my husband. It’s been an outlet for his love and passion that he otherwise would have been waiting to give. Waiting until he’d made it.

Here’s what it did for one young woman:

Stop waiting until you’ve achieved your goals to follow your heart’s desire.

This is the hard way, pursuing one thing to achieve another. It’s full of distractions, and may not get you where you want to go.

Take the simple & direct path ~ do that thing you want to do right now.
That thing you keep putting off until…..you’ve made it.

One thought on “Do It Now”