Ever heard of the Seven Deadly Sins?

Over the past few months I’ve noticed one of the these deadly sins showing up in my client calls, with some regularity. And you know what happens when you think of yourself as a sinner? Shame comes rushing in.

Shame likes everything to look neat and tidy. It hates the messiness of being human. So it brushes the debris of sin under the carpet where it can be forgotten. But dang, that just make things worse.

You end up tripping over it again and again.

What works a whole lot better is taking the rug out into the daylight and giving it a good shake.

“OOOH”, you think. “I don’t want everyone seeing my dirt”. I hear ya. That’s why you do it in private. Or with a trusted partner, who’ll hold the other end of the carpet, and cheer as the sin debris flies free.

The sin that’s been creating lumps under the carpet for my clients lately is Envy. You may know her by her pet name, Jealousy.

Whatever you call it, we’ve all experienced it. I certainly have! And it feels like crap. But sweeping it under the rug doesn’t make it go away. And pretending it isn’t there only trips you up.

A client, let’s call her Evelyn, was envious of her friend Jenny’s success. Jenny’d just been picked to be a back up singer for a hugely successful band. She was about to embark on a world tour that could be life-changing.

Evelyn was thrilled. She was inspired by how hard Jenny had worked to make her dream come true. She also felt relieved. The life of an artist can be a struggle. Lots of times Evelyn worried about how Jenny was going to pay her rent. This gig was going to make things easier for Jenny, and that made Evelyn so happy.

She was feeling all sorts of positive emotions about her friends success. She loved her like a sister. She was excited, but she was also jealous.

Jealousy kept killing her joy. And long with the jealousy came shame.

“How could I be jealous of my best friend?” Evelyn questioned. “I feel awful. Even though I’m excited and I know she’s earned it, I’m so embarrassed to admit it but there’s a part of me that doesn’t want her to have it” Evelyn was ashamed of how she felt. She thought it made her a bad person. It was challenging for her to even tell me about it, afraid that I would judge her.

I asked if we could look a little more closely at the jealousy, rather than sweep it away. She was tentative, but willing.

She was most upset that she could be thrilled for her friend and also not want her to have this success. We teased apart these seemingly opposing feelings by first exploring the beliefs she had about Jenny’s opportunity to go on tour.

What might it mean to Evelyn? With a bit of time to sink into her own body’s sensations, she could feel her fear. While on tour Jenny wouldn’t have as much time to connect. Evelyn might feel lonely. Jenny might change and not be the sweet understanding friend that she is now. She might meet all kinds of new people she liked better. Evelyn might be abandoned. Evelyn was just afraid of losing Jenny’s love. I helped her see this was perfectly natural. We all have a need to be loved.

Then we looked at the envy head on. I encouraged her not to be all polite and sophisticated about her feelings but to be as honest and straightforward as a kid might be. Just say what came up without filtering. She said things like, “I want that.” “It’s not fair” “Me Too”.

With a little investigation, it soon became clear that Evelyn didn’t really want to join a band. She had no desire to be trapped in a bus with a bunch of other people, eating road food and sleeping in hotels. She didn’t even want to be onstage in front of thousands of screaming fans.

What she did want was a chance to be heard, to make an impact, to be acknowledged.

Turned out Evelyn wanted to write a book, but she’d never had the courage to do it. She knew she had something worth sharing but was afraid she might not be a good enough writer. With some support in facing her fears she decided to take a writing class to start building her confidence and her craft.

That would move her in the direction of writing her book, but it didn’t guarantee she’d be heard, make an impact, or be acknowledged.

I had Evelyn imagine her book was published. It was making a huge impact. She was getting all sorts of acknowledgement for it. As she imagined this, I asked her to describe how she was feeling. She said, “Generous. Kind. Patient. Accepting. Beautiful. Smart. Open. Strong.”

I asked her how she’d treat herself if she was all of those things.

Turns out she’d treat herself quite differently. She’d dedicate more time to doing the things she wants to do.  She’d sleep more. She’d be on social media less and in nature more. She’d let go of some old relationships. She’d even shop at different stores and wear different clothes.

There were many things she’d change, but I had her pick the one change, that if she did only that, it would make all other changes easier. She chose it. She committed to it. I supported the change. It’s transforming her life.

You see the deadly sin of envy could very well be your soul speaking to you. It might be your highest calling showing you a glimpse of what you haven’t been willing to face head on.

Next time you feel envious (or jealous) you can use it as a way to hear your soul calling you.

Don’t judge yourself. Get curious.

If you don’t want someone else to have something, be curious again. What do you believe will happen to you if they have it?

By staying curious you’ll get to the core of your fear, and on the other side of that fear there is love. There is always love.

So let yourself be totally jealous, green with envy. And then listen to what your soul wants you to know. 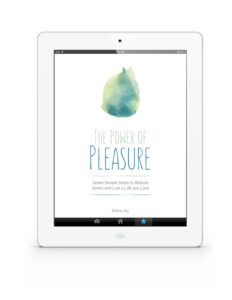 Learning how to deal with “unpleasant” emotions is one of the benefits you’ll get from reading my upcoming book, The Power of Pleasure.

Sign up for my newsletter below and I’ll be sure to let you know when it’s available this fall. I’ll also send you a free taste of what the book has in store for you.

My god daughter was just here visiting. One evening we were reviewing our favourite moments of the previous days. Mine came to me instantly. It was the time we spent making silly videos featuring her face and my feet. They were goofy 5 second videos that served no purpose other than entertaining us. It was pure pleasure. But while we were making them we cared about them.

“Let’s do it this way…Try again…How about if the foot comes from a different angle this time…Now make it look like your feet are actually mine…” For just a short time we were totally engaged in the creative process, improvising and improving our way through it all. We were focused and lighthearted, connected to each other and the work at hand. It was pure play.

The vacation was full of moments equally satisfying, like our lunch on the beach, just the two of us talking about friends and boys and travel vs. french class. There was less laughter and less creative focus, but the pleasure of engaging and the focus of the moment were the same.

I learned from Dr. Stuart Brown, author of the book PLAY, that play is not as limited as I had thought. Play includes spontaneous movement, fantasizing, storytelling, being an engaged spectator, handling objects, games and more. Play is being fully engaged in the process, rather than just focused on the result. So you see there are multiple opportunities to play every day. Ideally, Dr. Brown says, our lives are infused with moments of play so much so that work and play are integrated.

In our goal-driven, results oriented, competitive world, we risk losing play in our life. That is no small thing. Play is essential to the evolutionary process.  Babies who play become happier children. Children who play become happier, smarter adults. Play nourishes the brain. Adults who play are more creative, better problem solvers, more adaptable, experience more intimacy, compassion and pleasure, and have a greater sense of belonging.

Research shows that when play is suppressed we not only miss out on many of the joys in life, we are more prone to aggressive behaviour and we risk losing our survival instincts. Play is vital to life.

If the purpose is more important than the process it’s probably not play.” ~ Dr. Stuart Brown”

Play brings about an altered state. It creates connection with yourself, with the process, and with others. Play brings focus and presence. Play is seriously important. And a critical part of self care.

Here are three ways to bring more play into your life.

1. Acknowledge all the ways it already exists.  Before you strive for more, first appreciate what you have.

You may be playing more than you think. Noticing and appreciating the play in your life can bring about more.

2. Notice the many times you feel an impulse to play.

These impulses are your natural ways of connecting, nourishing yourself and thriving. You may override them from time to time to get on with the serious work at hand, but allowing yourself to follow these impulses daily, even just for a few moments, will infuse your life with play.

3. If you want more play in your life and don’t know where to begin, remember what you liked to do as a child.

It doesn’t have to be exactly what you did as a child, but remembering what you loved can set you in the right direction.

Over a decade ago I stopped striving for goals and immersed myself in the process and pleasures of life. Ironically, it’s led to pretty outstanding results.